Victorinox are a brand that sticks sharply to trend - appropriate considering the foundations of Victorinox Swiss Army. The brand started off specialising in the production of knives for the Swiss Army. The purchase of the brand Wenger affirmed Victorinox as the sole producer to the Swiss Army, a prestigious accolade indeed. In 1989, Victorinox began a new adventure in the manufacturing of watches. Entering into business in the United States, Victorinox differentiated by naming the watch offering of the business Victorinox Swiss Army and a legend was born. Victorinox Swiss Army contains a vast selection of watches â€“ ranging from luxury wear to rugged dive timepieces. Utilising Swiss expertise with mechanical and quartz hand movements, the watches â€“ like the knives produced â€“ are reliable, long-lasting and highly admired. Crafted to stunning designs to project a timeless elegance, when are you joining the Victorinox Swiss Army? At Total Watches, weâ€™ll find the right partner for you. With a broad range of menâ€™s watches available, youâ€™re bound to find one to trust â€“ such as the Victorinox Swiss Army Watch Maverick, containing genuine brown rubber strap, gold plated stainless steel with brown rotating bezel case and a brown dial with gold features, a three hand movement and date window at the 6 o'clock marker dial. 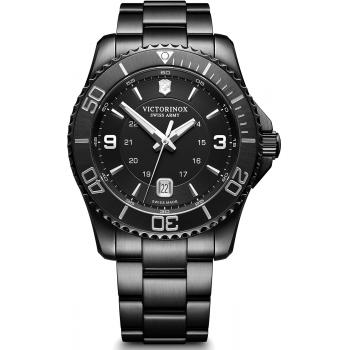