Ben Sherman was the brainchild of founder Arthur Benjamin Sugarman, launched in 1963. An man who always obtained a streak for the new and different, Sugarman â€“ who had changed his name to Sherman during his post-war residence in the United States â€“ realised the surging popularity of American Ivy League shirts amongst Swinginâ€™ Londoners and developed his own design. The shirt was a monumental success and demonstrated how post-war men could reinvigorate themselves through fashion. This principle is still heralded today and Ben Sherman watches embellish youth and confidence that has remained a cornerstone for British youth movements for 5 decades. With reference to American style and unique twists, Ben Sherman watches reject the norm using sophisticated materials to create a timepiece for men revered across the world. The menâ€™s Ben Sherman Watch WB065SM is beautifully crafted containing silver stainless steel for the bracelet with a matte white dial and date window will keep you feeling eternally young whatever the occasion. Ben Shermanâ€™s childrenâ€™s watches also provide easy-to-read dials to teach younger generations how to read time independently, again invigorating confidence for whatever the future holds. 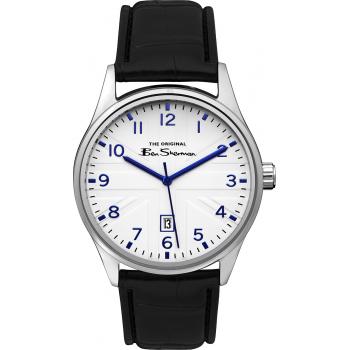